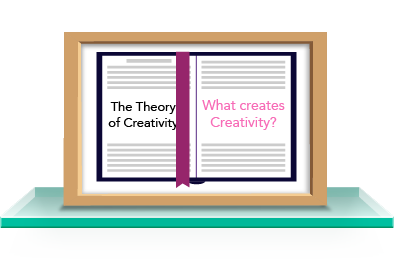 What creates creativity in the brain?

The brain consists of multiple functioning units which are connected together in different networks to perform different tasks.

The task positive networks (TPNs) are bilateral groups of areas in the cerebral cortex that collectively increase their activity when participants engage in demanding non–self-referential tasks. Within the grouping, dubbed the TPNs, are the Auditory and Visual Networks, and the Salience and Executive Control Networks.

Whereas these Task-orientated networks increase their activity during the performance of a task, a remarkably consistent set of brain areas reduce their activity at the same time. These widely separated areas of the cerebral cortex behave as a single unit, and are collectively known as the Default Mode Network.

Human Creativity is a result of the collective actions of this Default Mode Network.

Such a Default Mode Network (DMN) has been found in other spaces including chimpanzees, monkeys, rats and mice. In other words, creativity is also exhibited by other species of animals.

The following diagram shows connected areas of the brain that make up the Default Mode Network in humans. 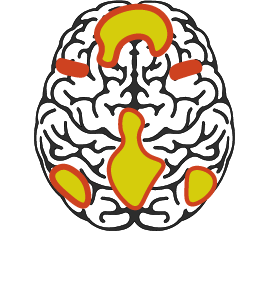 What is the function of the Default Mode Network?

One function of the Default Mode Network (DMN), and perhaps its main function, is one of introspection, variably called mind wandering, daydreaming, musing, stimulus-independent thought, or undirected thought. But perhaps this should be more accurately described as the experience of the DMN’s function. The function of this activity, reflected in these experiences, is to act as a “prospective brain . . . to imagine, simulate and predict possible future events. In this sense, the DMN is the waking brain’s equivalent of the dreaming brain”.

Stimulus-independent thought includes instances when an individual decides to figure out a logical solution to a simple problem. At the other extreme, in daydreaming, individuals might be startled to suddenly realise that they have been imagining a fanciful narrative without any self-reflective awareness of doing so.

An intermediate condition is that of musing, when an individual intentionally begins a train of thought but with the intent of relinquishing conscious control and, in essence, allowing the DMN to take over the progression of the thought train. This is what happens when one “calls on the muses,” often specifically for help in a creative artistic process.

Research has revealed much about the functions of the DMNs individual components. These functions include motivational and emotional processing, self-referential mental activity (e.g. what kind of person am I), the analysis of the beliefs, desires and intentions of others, recollection of prior personal experience, and imagination of the future.

At the heart of the Default Mode Network’s functionality is memory, which is fundamentally designed not for recollecting moments, but for its ability to imagine the future based on past experience. Without this ability, creativity in any form would not be possible.

Glanside and the Default Mode Network

The objective of Glanside creative techniques is to allow the mind to wander freely, through the use of the Default Mode Network, but then coordinate ideas generated from this process in such a way that they can create answers to creative questions being posed.

Glanside techniques are specifically designed to allow the Default Mode Network to follow a train of creative thought, setting a rough structure for thought, but allowing the nature of the complex linking of the components of the DMN to mix memory into creative ideas.