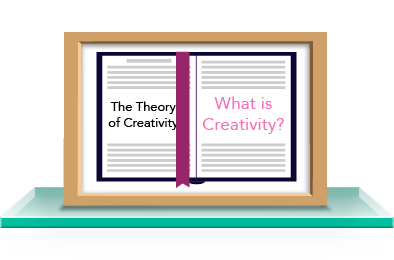 Although creativity can be defined in various ways, it typically is defined as the production of ideas that are novel and useful in some way. Creativity is not some kind of ability with which one is born, but rather, in large part, it is an attitude toward life.  People who are creative, in essence, decide for creativity.

How did humans develop the ability to be creative?

The extraordinary creativity of the human mind is due to the development of a uniquely human cognitive ability.

This ability, which was marked by the appearance of the earliest stone tools more than 2 million years ago, was the development of the capacity for one thought to trigger another thought.

Merlin Donald called this the self-triggered recall and rehearsal loop because it enabled our early ancestors to rehearse and refine skills, recall and reflect upon the past, and imagine the future.

One form of self-triggered recall is the chaining of thoughts and actions into streams of free-association, critical reflection, or complex behavioral sequences.

It can be argued that self-triggered recall became possible because a natural consequence of having a more fine-grained memory is larger working memory.

The benefit of being able to hold multiple items or properties in mind at the same time comes from being able to use them in sequenced actions or refine how they relate to one another in streams of thought. Thus, our ancestors became capable of self-triggered recall by “connecting the dots” between items in memory previously assumed to be unrelated. They went from being stimulus-response machines with simple responses, to being able to respond more flexibly and reflect on their responses.

This is the origin of creativity.

Not only are you creative, you cannot stop being creative

Nearly everything we experience is created by our brains.

You spend your time living in a world that is almost totally manufactured within the creative medium of the brain. You may as well take advantage of it whilst you are there.

Only 0.001% of the data deposited on the retina of the eye for instance makes it to the primary visual cortex. The brain receives a very compressed representation of the world.

William James was one of the first to call attention to this fact, remarking that “Enough has now been said to prove the general law of perception, which is this, that whilst part of what we perceive comes through our senses from the object before us, another part (and it may be the larger part) always comes (in Lazarus’s phrase) out of our own head.”

Vernon Mountcastle – one of the twentieth century’s preeminent neurophysiologists – summed up the situation nicely: “Each of us believes himself to live directly within the world that surrounds him, to sense its objects and events precisely, and to live in real and current time. I assert that these are perceptual illusions. Sensation is an abstraction, not a replication, of the real world.”