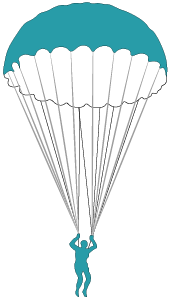 Creative Thinking advances from the specific to the general.

The Specific (the specific ideas) is the foundation of a creative project – I.e. the essential subject matter on which your artistic work is constructed.

The General (the general ideas) is that material you develop through the application of different creative techniques to the chosen specific ideas.  The General is the central framework of any creative work.

In the following illustration of the Objective Concepts Creative Thinking Technique is used to generate General Creative Ideas from Concepts derived from an object – in this case a parachute.

How does Object Concepts work?

Concepts associated with an inanimate object (e.g. a desk) are identified. These concepts can be linked directly, indirectly, or merely by association.

For a desk the concepts could include : support, material, manufacture, storage, work, information, intrigue, worry and opportunity.

As with all creative techniques, the more you push the technique, and the more sideways-glanced the concepts which you identify, the more creative will be the output.

You can choose any object to work with – although Object Concepts can be particularly effective when an object which is associated with the creative problem is used.

In this Illustration of the Objects Concept Technique the Specific Ideas are outlined by the following sentences taken from an Anglo-Saxon history of Britain.

The disappearance of the aristocratic families which had traditionally played an active role in the governance of the realm, coupled with Cnut’s choice of thegnly advisors, put an end to the balanced relationship between monarchy and aristocracy so carefully forged by the West Saxon Kings.

Cnut died on 12 November 1035. In Denmark he was succeeded by Harthacnut, reigning as Cnut III, although with a war in Scandinavia against Magnus I of Norway, Harthacnut was “forsaken [by the English] because he was too long in Denmark”. Peace in Scandinavia left Harthacnut free to claim the throne himself in 1040. He brought the crowns of Denmark and England together again until his death in 1042.

The importance of Worcester depended largely upon its bridge. There was no other bridge across the Severn between Gloucester and Bridgnorth; the conflux of travellers was felt to lay a grievous burden upon Worcester Prior

During the reign of Harthacnut, Worcester for a time became the storm-centre of the English resistance to the heavy taxes of the Danish king. Two of his huscarls in May 1041, while collecting the geld, were attacked and driven into the tower of the priory and there slain. After six months’ preparation a royal array, led by Godwin, Siward and other earls, reached the county.

The following is a list of Concepts derived from an Object. In this case the object is a Parachute.

The following is a first-draft text – a list of ‘points of departure’ for a longer creative text – and is designed to show how the Object Concepts Creative Technique could structure the flow of general ideas from starting (specific) ideas.

Each of the sections is derived or influenced by one of more of the above Object Concepts.

For the purpose of this illustration the Object Concept references are highlighted.

There is one essential body that is wrapped around the town. The bridge is the reason the town exists, conveying trade across the river and supporting the town through times of strife and famine.

We gathered last night in the hall of Sigeferth of Worcester, the cold was intense and the fire in the centre of the hall had been raised for the occasion. The window boards were shut and the smoke was turning in the roof space. Sigeferth addressed the Freemen.

‘The wind has carried the Viking King Harthacnut across the sea from his Danish lands. Now he wishes to take the wealth from his Saxon lands and turns first to taxes on our bridge, because he understands the importance of crossing water and a bridge cannot hide itself in the surrounding lands.’

Everyone is close here. Everyone exists through their belonging to the town. It is the town and your neighbours and brethren who defended you, who are your brothers-in-arms. There is nothing more terrifying than to be an outlaw, with nobody to fight for you or your cause.

With such a distant king, the ties of the Freemen are strong to thegn Sigeferth of Worcester. It is Sigeferth who has called us to his fire. He tells of the huscarls of Harthacnut who will shortly come to collect taxes from the bridge, and taxes from the lands that it bridges, to pay for Harthacnut’s armies and court.

The rules of our land and of our house are as clear as if scratched in stone. When Sigeferth demands that we assemble, we steady our intentions. We put aside our tools and take up our weapons. When we set out to stand against the huscarls of Harthacnut we know that the risk is high and that our homes may well burn.

‘Do not forget,’ said Siegeferth through the smoke of the fire, ‘the real village is the people and the people can melt into the hills and woods: and no viking king would ever destroy a bridge. Stand together and the end will be mellow for us all. If we do not stand together then the sword of Harthacnut will cleave us still further apart.’